Theatre Mensch premiered Mary, Mary at The Camden Fringe 2016 at the Lion and Unicorn Theatre on 20th & 21st August 2016.

⭐️⭐️⭐️⭐️ “Mary, Mary is an ambitious play that fits A LOT into its hour duration” – Female Arts 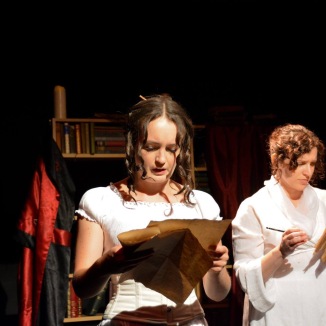 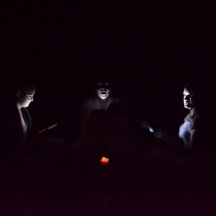 The seance at Villa Diodati begins 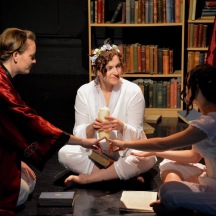 On a dark and stormy night during the “Year Without Summer,” a young Mary Shelley, challenged by Byron, sets out to write the ultimate horror. In the turmoil of Mary’s mind, past and present blur, and the created becomes the creator.

In a family of women ahead of their time, Mary is confronted with ghosts of her past, and grapples with the ultimate question – what happens when the dead come back to life? Theatre Mensch premiere their new work marking 200 years since Mary Shelley started writing her Gothic masterpiece, Frankenstein, and celebrating the lives of an extraordinary mother and daughter who never had the chance to know one another.

Written and Directed by Ashley Pearson, staff director with OperaUpClose and associate artist with Riot Act. Her writing credits include “Coverage” (Courtyard Theatre) and “Music oft hath Such a Charm” (OperaUpClose), and she has worked as a literary researcher at the Ustinov studio, Theatre Royal Bath. Pearson studied Theatre Directing at East 15 Acting School and Liberal Arts at Quest University Canada.

Produced, Performed and devised by Theatre Mensch’s Artistic Director Ashleigh Loeb, a theatre maker and actor who has worked with the Arcola Theatre and Little Angel Theatre. Ashleigh has also played several characters in Big Finish Productions’ fantasy audio series “Pathfinder Legends.” She is a graduate of East 15 Acting School.

Performed and devised by Francesca Burgoyne, co-founder of Blue Sparrow Theatre, which wrote and performed “Day of the Dog” at last year’s Camden Fringe. Francesca has recently performed in “Emilia Galotti” (The Space, Baron’s Court Theatre) and in “Wind in the Willows” (Brentwood Theatre). She is a graduate of East 15 Acting School.

Performed by Katy Helps whose recent stage credits include “The Taming of the Shrew” with the critically acclaimed Illyria and “Wuthering Heights”, “Sense and Sensibility” and “Pride and Prejudice” (Chapterhouse Theatre Company). Screen work includes “The Bill” (ITV) and “Killer on the Line” (Crime and Investigation Channel). Katy trained at Mountview Academy of Theatre Arts.